We can officially call our development project at 151 West Hastings the “award-winning Ormidale Block”.

This is tremendous recognition for Century Group and for Ormidale Block, and we would like to thank B+H Architects for submitting the award application on our behalf.

Ormidale Block was awarded the REBUILD Award for demonstrating building-scale excellence in the following three ways:

1. Responding to public policy initiatives that accelerate place of regeneration resulting from development.

Below is the official press release from B+H Architects.

Heritage commercial and industrial buildings come from a different age. Rarely do they suit the needs of a modern city. Lane ways are too narrow for cars and people. Public spaces don't reflect contemporary lifestyles. And the structures themselves aren't built for sustainability.

Ormidale Block is an example of how a building built in the early 1900's can be rebuilt for the present. Last Thursday, October 8, the Canadian Urban Institute (CUI) awarded Century Group and B+H Architects with the REBUILD prize. This prize is part of CUI's Brownie Awards - a series of awards celebrating innovative brownfield development in Canada.

A heritage space in Vancouver's Gastown district, the design of Ormidale Block addresses the realities of the 21st century while preserving a heritage look. Ormidale's success is the result of close collaboration between developer and designer. Together, they created a heritage building that combines preservation with evolution. While Ormidale Block's front façade looks like it came from the turn of the century, the rear laneway has a more contemporary design that embraces the public sphere.

The design team worked with a heritage consultant and researched city archives. They documented and detailed the character-defining elements of the original Hastings Street façade. The team also used laser scans of the existing building so that the new façade would match the original. Finally, they tested the design's scale, rhythm and proportion through field investigations.

Limited by neighbouring buildings and a rear lane, the team had to keep the original building's footprint. Despite these limitations, they were still able to add modern considerations like parking, loading, and recycling facilities. Contemporary sustainability features were also included, bringing a green element to a brownfield.

The windows along the back were small punched windows and the back entrance had no connection to the rear laneway. The solution: a drastic change that would match the evolving streetscape. The design team negotiated with the City, getting them to rethink typical heritage procedures. The design adapted the shape of the windows to evoke a more modern aesthetic. And use of Corten steel and rust-coloured brick kept the heritage feel.

THE NEXUS OF A NEIGHBOURHOOD

Ormidale Block will be a dynamic neighbourhood hub. A five minute walk from Waterfront Station (downtown Vancouver's transit epicentre), the building has indoor and outdoor bike racks, showers, lockers and electric bike plug-ins.  With a 4,800 SF green rooftop deck and a public space integrated into the back alley, Ormidale will be an incubator of energy and activity.

Ormidale Block will bring office and retail space to Vancouver in Autumn 2016. 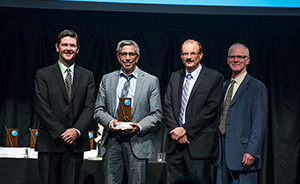